Recently, the requirement of high image quality in advanced display technique becomes more and more important. The next generation interface with the capability of high speed data transferring rate for such complicated video/audio content transferring is needed. The specification of HDMI2.0 (High Definition Multimedia Interface 2.0) is firstly presented by HDMI association in 2014. The maximum transmission rate of HDMI2.0 TMDS (Transition Minimized Differential Signaling) Pair is improved from 10.2 Gbps to 18Gbps, compared with HDMI1.3, as shown in Figure.1. Therefore, the HDMI2.0 interface can be used for the complicated data transferring such as high image resolution (4K*2K @60Hz) applications.

Figure.1 Comparison of different HDMI protocols for their transferring rate

The schematic structure of HDMI is illustrated in Figure.2. The three high speed TMDS data pairs and one high speed TMDS clock pair are used for video and audio data transmission. The low speed DDC and CEC are used for communicating between electronic products. Because of its characteristic in high speed data transferring, the HDMI interface becomes a general equipment in many consumer products, such as personal computer, laptop, monitor, and set-up box. 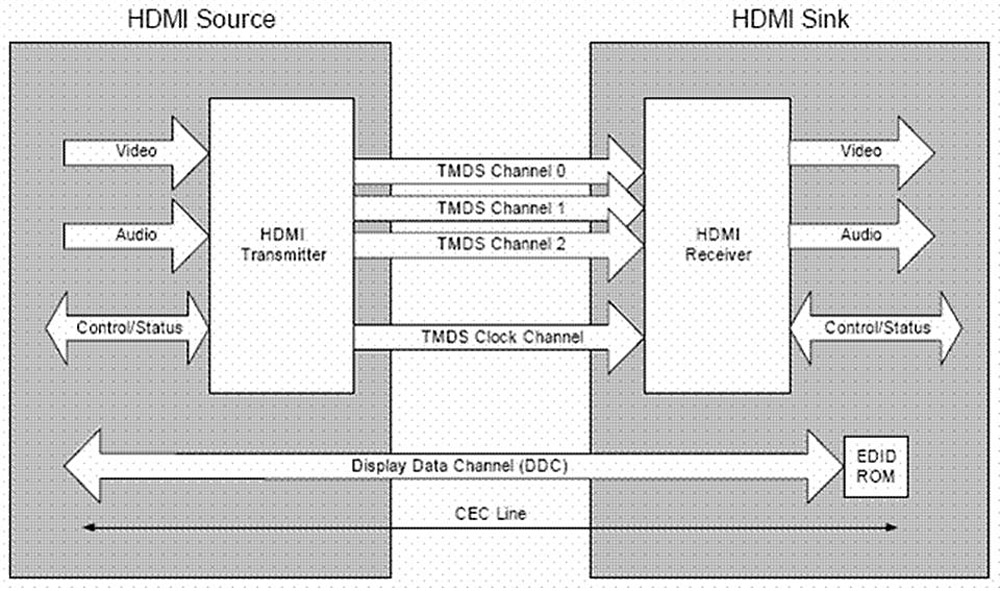 The advanced semiconductor process has been widely used in the current ICs on the purpose of low power consumption and high frequency transmission. However, the thin gate oxide thickness and shallow junction depth in the modern semiconductor process make the ICs become more and more sensitive with the ESD (electrostatic discharge) event. The system designers have recognized the ESD issue hence the ESD protection ICs have been widely used in most HDMI interfaces in order to increase the system’s  ESD robustness. On the other hand, the signal integrity during the high speed data transferring also has to be kept completely. Consequently, how to choose correct ESD protection ICs as well as to keep the signal integrity becomes an interesting topic for system designers. 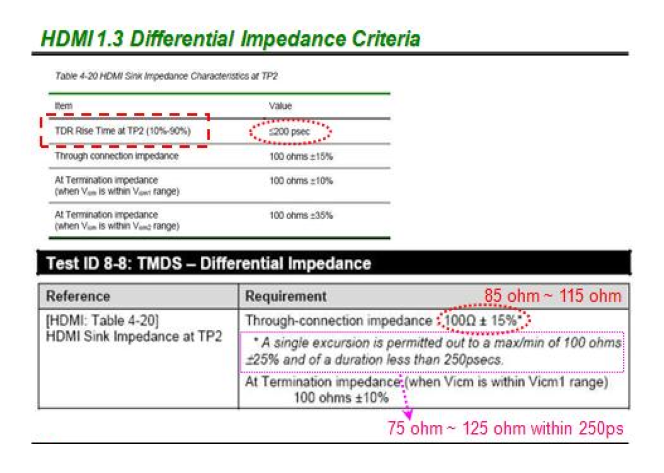 On the trace of HDMI TMDS pair, the high frequency common mode choke just behind the ESD protection IC, and the series resistance before the main IC are usually designed in a system, as shown in Figure.4. Hence, the impedance is supposed to be compensated by turning the characteristics of the choke and resistance.

Figure.4 Impedance Compensation by the devices on the trance of HDMI TMDS pair

In the begin, the package type of the ESD protection IC is the SOT23-6L, as shown in Figure.6 (a), is usually used on the HDMI TMDS pairs for ESD protection. However, because the variation of the resistance is pretty large when the PCB layout is changed by using the SOT23-6L, the        Figure.5 Modification of HDMI TMDS pair’s trance width/distance SOT23-6L is replaced with other package types like MSOP-10L and DFN2510P10E, as illustrated in Figure.6 (b) and (c). The package type of MSOP-10L and DFN2510P10E can extremely support the feed through design that the ESD protection IC can be designed on the trace of high speed data transmission lines directly. Base on the benefits of the feed through design, the signal integrity and the PCB area is suppose d to be saved effectively. Furthermore, the package type of DFN2510P10E now also becomes more and more popular due to it slim size.

In order to keep the signal integrity as well as the ESD/EOS robustness on the HDMI TMDS pair applications, Amazing also provides two parts, the AZ1143-04F and the AZ1023-04F for this king of request. The capacitance and the TLP (transmission Line Pulsing) clamping voltage of AZ1143-04F are only 0.45pF and 9V, respectively, as shown in Figure.7. Especially, the AZ1143-04F can sustain the IEC 61000-4-5 Surge (1.2/50μs) test up to 6A. Hence, the robustness of AZ1143-04F is expected to effectively protect main chip from the EOS/ESD stress. In addition, The HDMI CTS differential impedance testing shows that only 13ohm dropped when using AZ1143-04F (as shown in Figure.8). But the impedance is still within 85 ohm to 115ohm, which is supposed to pass the HDMI CTS testing criteria sufficiently. 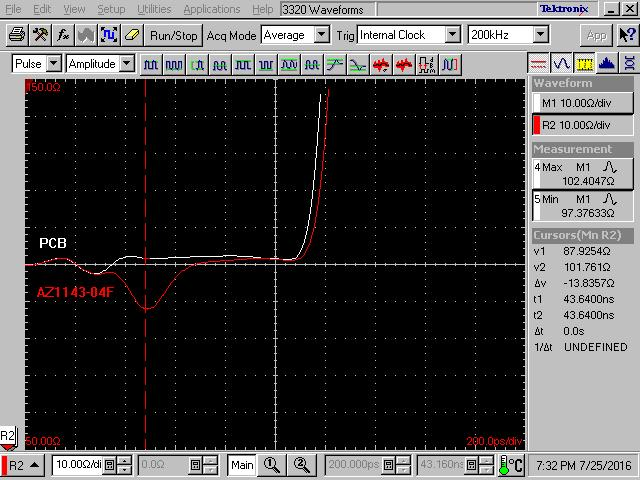 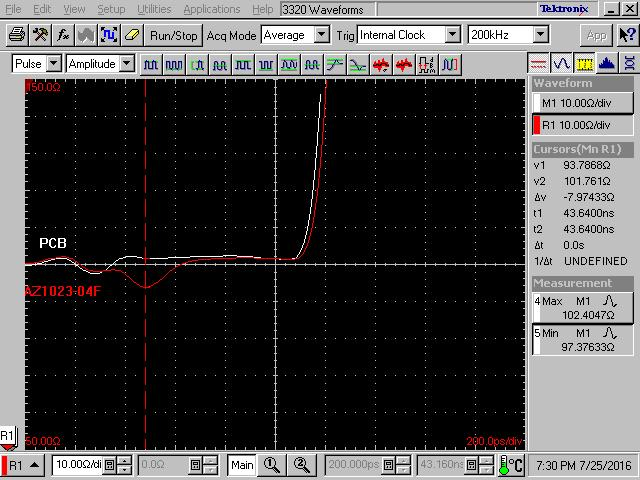 In order to reduce the crosstalk between two high speed signals, the two-channel TVS array, the AZ1023-02F and its PCB layout has also been proposed by Amazing, as illustrated in Figure.11. According to the package type (DFN1210P6X) of AZ1023-02F, the distance between two differential Pairs can be successfully enlarged, as well as the PCB area still can be saved due to the its tiny package. The capacitance and TLP clamping voltage of AZ1023-02F is 0.18pF and 13V, as shown in Figure.12, respectively. And the HDMI CTS differential impedance testing shows that only 9ohm dropped when using AZ1023-02F (Figure. 13). 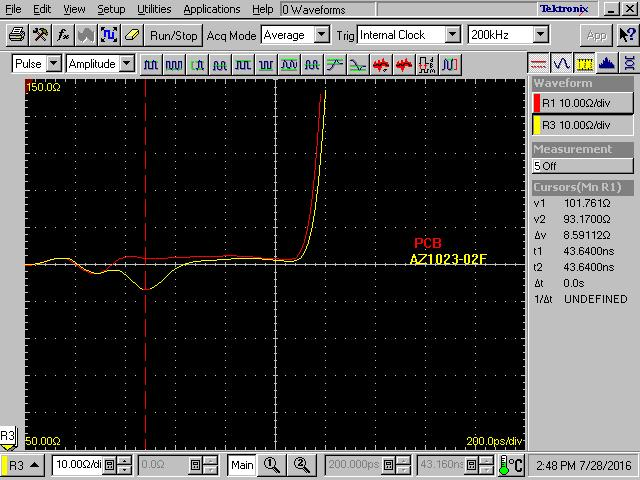 Consequently, Amazing suggests that the AZ1143-04F, AZ1023-04F, and AZ1023-02F that have many benefits such as the low capacitance, low clamping voltage, and directly feed through layout capability are candidates for high speed HDMI interface applications.

In order to keep the signal integrity, there are some suggestions are summarized as follows,

(3)  The series resistance can be layout in advanced in order to compensate the parasitic capacitance effect.

(4)  The testing pad on the trace of HDMI TMDS pair should be omitted if possible. In general, the testing pad will increase the impedance value by 1~2ohm.

Accordingly, if the above suggestions could be included in the system design, the HDMI CTS testing is supposed to be passed through the ESD protection ICs is designed on the trace of HDMI TMDS pair.